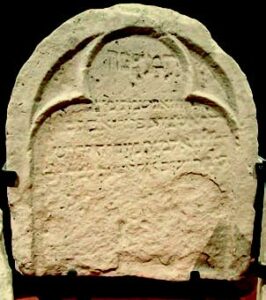 Starting in May-June 2022 two new databases will join the PEACE portal, both directed by Dr. Sonia Fellous (CNRS/Sorbonne). The first among these is a database of Jewish medieval inscriptions from France, containing 332 epitaphs. These inscriptions are in Hebrew and bear dates according to the Jewish calendar. The database relies on the volume by Gérard Nahon, Inscriptions hébraïques et juives de France médiévale (Les Belles Lettres, 1986), supplemented by epigraphic analyses by Dr. Fellous, especially of the epitaphs from Paris and Strasbourg.

Dr. Sonia Fellous also contributes a second database of ca. 60 Jewish epitaphs from Tunisia, primarily from the cities of Borgel, Nabeul, Sousse and Sfax, dating to the 19th century. These epitaphs are mostly written in Judaeo-Arabic (Arabic written with the Hebrew alphabet), but also contain Hebrew phrases and abbreviations. They testify to the rich and complex cultural embedding of Tunisian Jews in the surrounding Islamic culture.